Cyto-Matrix’s Iron Matrix contains iron in the chelated, bis.glycinate form, optimal for absorption and gentle action on the digestive tract.

Iron continues to be the most commonly overt nutrient deficiency in the developed world, with an especially high prevalence in women and during pregnancy. In fact, 1 out of every 2 women will be iron-deficient at one point in their lives and even more suffer from symptoms associated with suboptimal iron levels. Although fatigue, weakness, hair loss and pallor are classic symptoms of iron-deficiency anemia, low iron levels affect many other body systems.

For example, iron deficiency has been found to be a common cause of restless leg syndrome in approximately 1 out of every 4 cases and supplemental iron can improve symptoms. This is thought to be achieved by iron’s upregulation of dopamine synthesis from tyrosine. It is also well-documented that children and adults perform poorer on mental function tests in states of iron deficiency, with areas such as attention, memory and concentration being affected.

Iron also plays a critical role in many hormonal pathways. Iron is required for thyroid conversion from thyroxine (T4) to triiodothyronine (T3) and, in cases of hypothyroidism with concomitant iron deficiency, combination treatment with iron and levothyroxine has been shown to be superior over each therapy alone. In women with heavy menstrual bleeding, iron deficiency can actually cause a recurring state of heavy menstrual bleeding through weakened uterine muscles, thereby exacerbating the condition. Evidence also shows that women with unexplained infertility and suboptimal iron status may benefit from iron restoration therapy.

Finally, iron is needed for proper immune function through cytokine production in macrophages and an iron-deficient state may lead to an insufficient immune response. For example, research in individuals with oral candidiasis has shown that iron restoration can lower salivary candida counts and reduce oral lesions.

Despite all of the health benefits that come with targeted supplemental iron, many women and iron-deficient individuals are hesitant to supplement with iron or they become non-compliant due to digestive side effects such as constipation, nausea and stomach upset.

Cyto-Matrix’s Iron Matrix contains iron in the chelated, bis.glycinate form, optimal for absorption and gentle action on the digestive tract. This greatly reduces the likelihood of unwanted complications during iron supplementation. Each capsule contains 20mg of elemental iron with additional vitamin C, B6, B12, folic acid, magnesium and copper to help in the absorption of iron from the digestive tract and aid in the production of healthy red blood cells.

There are no reviews yet.

Be the first to review “Iron Matrix” Cancel reply

Adults - Take 1 to 2 capsules per day with food, or as directed by a healthcare professional. Take a few hours before or after taking other medications. 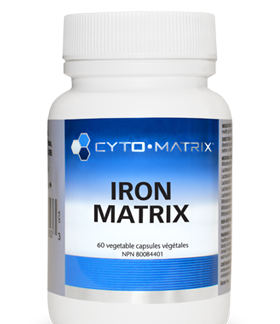 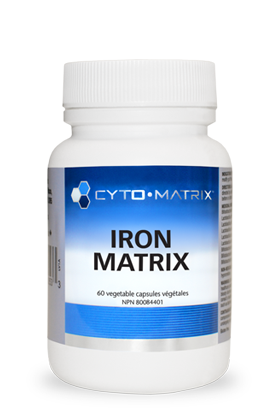